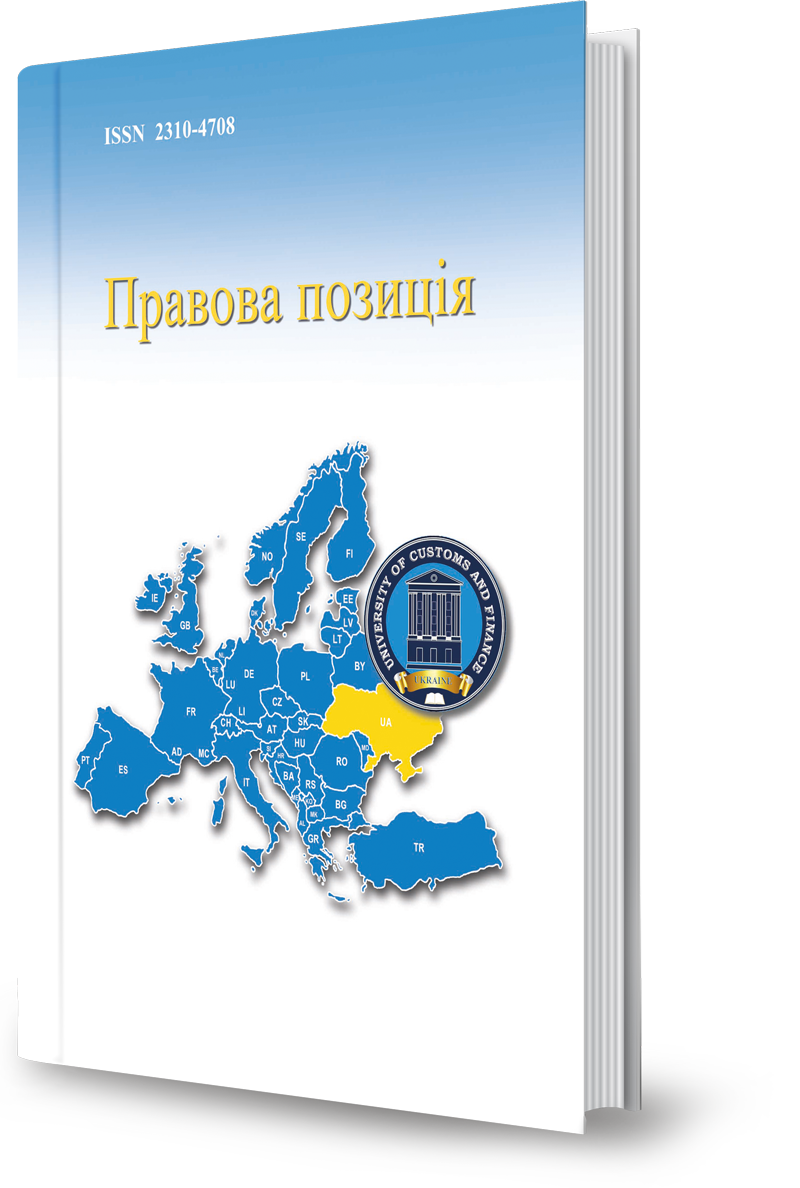 HISTORY AND THEORY OF LAW

Ye. V. Doiar
Preconditions and significance of a supreme court overruling from its opinion on the application of law

V. O. Karpichkov
Peculiarities of administration in the cities and villages of Galicia at the end of the 18th and the beginning of the 20th centuries

I. L. Kritsak
Types of pre-court settlement of administrative and legal disputes and the legal basis of their implementation

O. G. Strelchenko, I. G. Bukhtiyarova, O. A. Bukhtiyarov
Doctrinal characteristics of subjects of public administration: a modern dimension within the Europeanization of society

D. O. Deineko
Legal framework and political conditions of peaceful cooperation of the ASEAN. Accession of Ukraine to the Treaty of Amity and Cooperation in Southeast Asia

О. V. Lehka
International legal regulation of the protection of children’s rights under the conditions of the legal régime martial law

TRIBUNE OF A YOUNG SCIENTIST

D. E. Bohatov, I. S. Mielieshev, V. S. Prykhodko
The role of the European Union in supporting peace and international security in the aspect of the full-scale military invasion of the Russian Federation on the territory of Ukraine

S. O. Vesnin
Foreign experience of legal regulation of lawyer’s disciplinary responsibility and some areas for its borrowing in the Legislation of Ukraine

V. A. Zhura, M. V. Kornesiuk, K. I. Stepaniuk
The place of the prosecutor's office in the process of cooperation with the International criminal court

A. O. Ovcharenko, A. V. Myshanych
The role of the Bureau of Economic Security of Ukraine in the conditions of martial law

A. O. Pokrason, K. M. Martyniuk, L. O. Bulko
On the question of temporary protection in the countries of the European Union

I. O. Verba
Concepts and features of alternative methods of settlement of administrative-legal disputes in the sphere of public-legal relations

O. R. Pelishenko
Forms of implementation of state policy in the field of vocational pre-higher education

Yu. V. Tsurkan-Saifulina
Interbranch connections of the components of the legal system

M. V. Makarov
Models of ancient citizenship and their features in historical retrospect

D. O. Skrypnyk
Prospective effect of legal positions of the supreme court in criminal proceedings: should it be implemented?

N. A. Huralenko, O. V. Melenko
The right to evidence in proceedings of constitutional control

I. M. Lytvyniuk
Lawsuit in administrative proceedings as a procedural form of appeal to the court

Y. O. Legeza, Y. A. Volkova
Applicability of procedural reflection of the court in the settlement of electoral disputes (analysis of the practice of the ecthr)

V. O. Riadinska, Yu. O. Kostenko
Guarantees of non-prosecution of persons who intend to use a one-time (special) voluntary declaration of their assets

Yu. S. Kozlova
Administrative and legal status of the national bank of Ukraine as a subject of state financial monitoring: concept, content and constituent structural elements

Help about the author